A lot of folks responded, showing their excitement for this recent discovery. It didn’t even take up to hours after the video was uploaded for it to go viral.

Can Capybaras Be Kept As Pets? [Answered]

But whilst some were exuberant, quickly spreading the news to their friends and loved ones. Others waited for confirmation from a credible source before posting.

But it has been many months now. What did that photographer see? Was he right? We’ll find out in the course of this article. But first, let me share a little background knowledge about the capybara.

Capybaras are the largest rodents in the world by mass and weight. They are herbivorous and semi-aquatic.

They go about their activities mostly in the daytime and they are very good swimmers. They love to spend time in the water and they can even hold their breaths for more than four minutes if it was required of them.

They can also sleep in the water, as long as they have their noses a little above the water and can breathe. For a four-legged herbivorous land mammal, this rodent must love the water so much one might think.

Even their cousins, the guinea pigs, rock cavies, and the beaver don’t spend that much time away from land. Only the muskrat and the nutria share a similar passion for swimming like the capybara.

This love for water is part of the reason it earned the name Hydrochoerus hydrochaeris (which means water pig). Looking at it, it bears a stunning resemblance to the guinea pig this means small ears, eyes, nose, and a big head.

Small legs and a tail that is almost not visible. The weight of a typical adult capybara ranges from seventy to one hundred and forty-three pounds depending on the location of the mammal.

Research shows that certain  South American countries have it bigger when compared to others. Did I forget to mention, south and North America are the only continents in the world with a good number of capybaras drawing breath in their wetlands and savannas?

They eat their own poo, which is weird for a rodent but it contains just enough protein to help them digest the hard plants they consume.

They don’t mind being alone but they usually move around in packs, yes like wolves. They have a dominant male who plays the alpha and other male and female members. They can be as many as thirty-five or even forty in some cases. They are normally brown in complexion.

Is There A New Species Of Capybara?

Unfortunately, the fact contained in the tweet posted by that wildlife photographer may not be completely true. You see, shortly after he uploaded the first video stating that there was a  new species discovered. He uploaded another message via the same channel citing that the first one was false but by the time he did, the first one had already gone viral.

In the second tweet, he stated that those capybaras were the usual ones and what he mistook to be green stripes the first time he saw them was just duckweed and algae.

A group of capybara left the swamp with duckweed and algae on their skin. That’s the fact. He said. Sorry to burst your bubble but no new species was discovered earlier this year. Regard such information as false from now on.

The green Capybaras are not a new species. They were discovered as far back as 1762. Many people refer to it as the bigger capybara and the red one as the lesser capybara. This is because the green capybara can weigh up to at least seventy-five kg and sometimes much more than that.

While the lesser (red) capybara cannot exceed twenty-eight kg in weight. Its binomial name is Hydrochoerus hydrochaeris. But there were not always two, the capybara was initially four species but two had gone extinct. The green capybara is often hunted for their skin and meat. But they are not a threatened species.

They are semi-aquatic and they love to move around in packs, you can find about ten to twenty of them at once. They can grow up to four feet in length and can weigh as high as sixty-five kg. They have been known to be very friendly to humans and they get along with other animals, even carnivores like crocodiles.

They always make their homes around watery habitats wherever they find themselves. They are very good swimmers and can spend up to five minutes submerged in water.

Furthermore, they eat their own poop to help them break down their food easily. This is because grass and other plants they consume are hard and they need to be digested twice.

Like I said before, they are friendly animals and they get along with humans and other animals. So it is possible to turn one into a pet. You just have to find out if it is legal to own one as a pet in your region before you proceed.

What Makes A Capybara Turn Green?

Capybaras don’t turn green. They are born with a specific color of complexion and they remain that way for the rest of their lives. Even in their complexion, they don’t appear green. 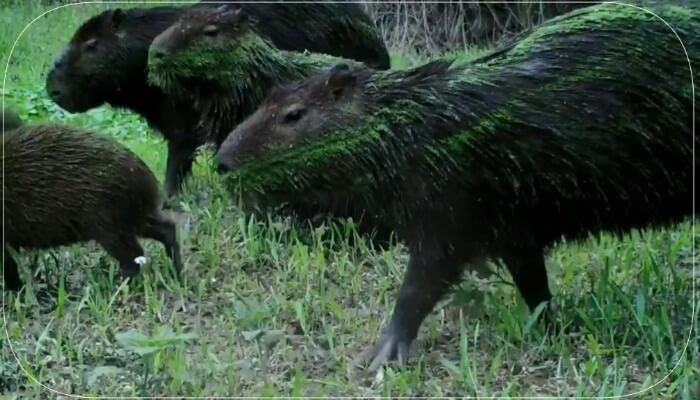 The reason is that they differ in size and weight. Again, there was no recent discovery of any capybara species.

The wildlife photographer was mistaken about what he saw. Those Capybaras did not turn green, they were simply escapees covered in dirt and mud and he made a second post trying to clarify this fact.

By nature, the capybara is a calm animal that loves to spend time with its loved ones. They are known to be very friendly and they get along with humans.

Why Are Capybaras So Friendly? – [Explained]

In fact, they love to spend quality time with humans. Given their friendly nature,  I would say there is nothing to be scared of. As long as you won’t go-ahead to push your luck by trying to offend or provoke them.

They don’t attack humans out of the blue, that rarely happens. But in all your dealings with them, you have to remember that they are wild animals.

They have been known to strike with their two incisors when they are provoked but that is on rare occasions.

And those incisors can be very dangerous not just because of their sharpness but also because they hold crazy germs and bacteria that will be very harmful if they made contact with your bloodstream.

They are wild animals but you won’t compare their instincts to lions or other carnivores. Because they are herbivores. Their primary source of food is plants and aside from plants, they eat their own poo.

For this reason, it is safe for humans to move around them or with them. They have no desire for meat. Capybaras can be taught to be the perfect pets, they are quite smart and they can help you with stuff.

In conclusion, there can be safe cohabitation between Capybaras and humans. As long as you follow the rules ensure that they remain unprovoked everything will be fine.

Yes, they can. All species of capybara are excellent swimmers. In fact, they love to spend more time in the water than on land. That is why they are classified as semi-aquatic animals. It’s almost as though they were created for it.

Capybaras Showing they are good swimmers

They can spend all day in water as long as their eyes, nose, and ears are above the surface of the water. Below are some reasons capybaras love to exercise their aquatic traits.

Although they are quite fast on land. If a capybara was being chased by a carnivore. It would run to the nearest water source and dive into it. They are so good even crocodiles have a hard time catching them in the water.

If they can trouble crocodiles, how much less other land mammals.

Even if they spotted a predator from far away they could easily go under the water for about four to five minutes. And reveal themselves when they were sure they had eluded danger.

When Capybaras wander in the sun for you long, their temperature increases, and when it reaches a certain level they become dehydrated.

How To Groom Capybara As Pet – [Best Tips]

Swimming in cool springs is like a cooling mechanism for them. That’s how they cope with their constantly rising temperature.

Where Do Green Capybaras Come From?

They hail from southern and northern America. Although there have been a few reports of them wandering the streets of Florida.

Can You Turn Green Capybaras Into Pets?

Being herbivores, it is very likely. But you need to find out if it is legal to own one in your state. In some states, breeding, buying, and selling capybaras are illegal.

Once you have that settled then you need to worry about meeting their feeding and housing requirements. They require much space and a lot of food and like most animals, food is a commodity that can be used to purchase their love.

If you can provide these basic needs, you will in time enjoy their company as they will yours. They love to cuddle and once they get used to having you around, they will always come to you seeking attention.

They are very friendly and they make great pets. By nature, they are not aggressive but they have been known to bite individuals that make them feel threatened.

They have strong and sharp incisors so you should be careful around them until they’ve known you for some time and feel comfortable around you.

Also, you should note that you cannot train a single capybara at a time. They are not animals that enjoy living alone. They will require the company of their loved ones for the meantime before they feel at home around you.

You need to keep about two to three of them at a time and make sure that you are not keeping male-exclusive pairs or vice versa. Mix them.

Just like I’ve stated before, they love to cuddle so they will cuddle each other in the meantime before they make you a part of the family.

Also, they might mate in the process and this will result in the production of children so be prepared to house or sell them.

Thank you and good luck.

Do Capybaras Hate Or Love Other Rodents –...

Are Capybaras Smarter Than Dogs – [Answered]

What Do Capybaras Do At Night? – [Answered]

How Can I Compare Double Doodle With Capybara?