How Do Capybaras Reproduce | Reproduction In Capybaras?

Having come under harsh practices from humans, who hunt and poach them for their meat, hide, and the grease on their fatty skins, and also predatory from wild animals like jaguars, foxes, bush dogs, feral dogs, black vultures, pumas, eagles, caimans, and wild snakes like anacondas, capybaras have been able to stand the test of time, man and other external factors due to a sole reason_Reproduction.

And after seeing their number reduced in recent times, they have been able to keep their population stable despite all these adverse effects due to their ability to breed rapidly and continue the cycle of living.

MUST – READ: What Capybaras Need To Survive Any Where

This content, however, has been written in order to tell more about this un-threatened species. And also, to shed more light on one of their core essential processes as living things; Reproduction. And to satisfy the curiosities of the readers, who may have heard of this animal before, and are wondering how they go about the process of reproducing.

In This Video You Will Come To Know That Capybaras Can Be Home Trained.

To better understand the reproduction process of Capybaras, there are many things to put into consideration. And to do that, we have painstakingly laid out each below.

Capybaras are gregarious creatures that live in herds of up to ten to twenty individuals, consisting of a minimum of two adult males and four females and a maximum of four adult males and seven adult females and their juveniles, depending on the season.

READ NOW: How Do Capybaras Relate With Other Animals & Humans?

Studies have proven that capybaras form cohesive groups, characterized by a complex social structure with a dominant power structure and an individual specialization of functions. They are crespular creatures (meaning they are most active in the morning and evening) and spend most of the hottest phase of the day wallowing in water or mud.

They graze in the late afternoon and early evening. And are equally agile on land and in water. Their activity and inactivity at night depending on the presence of possible predators and threats. Bachelor groups do not exist within Capybaras, and most males belonging to no group at all have little protection from predators and a slim survival rate.

RECOMMENDED: Complete Beginner’s Guide To Grooming A Capybara As Pet

Each group of capybaras maintains and protects a territory that encompasses grazing and wallowing sites which may remain stable for years. Capybaras bark at intruders and this is often exhibited by each dominant male of the group.

Or may sometimes serve as a signal of imminent danger from subordinate males. Males may also grow more aggressive with the increase in the male population in groups. Sometimes, a fight ensued between the dominant male and subordinates, and both may be seen rushing at each other, rearing on hind legs, or grappling with each other.

Subordinate males are seen occupying positions on the edge of the group, away from the dominant males. Both sexes are capable of scent-marking, and this may play a major role in defining territories and partners. Female capybaras usually scent-mark less when compared with their males.

For either sex of capybaras to be able to reproduce, they must have gone through several phases of growth. The usual order begins with infancy, which lasts until they are twelve months old; sub adulthood, which also comes to an end when they are bordering on eighteen months.

Capybaras Are Excellent Swimmers, Watch How These Giant Rodents Swim Effortslessly In This Video

However, when in managed care the female has been noticed to reach their sexual maturity around twenty-six months. Capybaras are known to breed all year long (Iteroparous). And their greatest peak inbreeding has been tracked to be around the start of the rainy seasons. April or May precisely.

Capybaras are annual polyestrous animals with spontaneous ovulation. They breed all year long, but do so more frequently at the beginning of the rainy season. When in estrus, the females give off certain signals and this is noticed by the males who are able to discover this through the female’s scent change, or through such actions as the female’s whistling through their nose. The female’s estrus cycle is around 7.5 days, and they remain receptive for up to eight hours.

READ NOW: Why Are Capybaras So Friendly? {REVEALED)

Courting in capybaras is majorly monopolized by the dominant males, who in mating seasons guards and watched the females. The dominant male of a group sniffs their females more often when in estrus and pursued them around. But may not be able to stop other subordinates of the group from securing copulation. After being pursued long the female capybara enters the water, swimming back and forth in expectation of a male.

Copulation in capybaras is mostly done in the water and last only for some seconds. And this may be interrupted by the female herself when not desiring to mate, or maybe truncated by a dominant male, who conspicuously watch and guard the females all through the mating season. 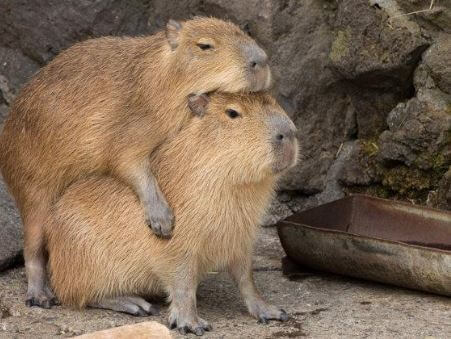 Capybaras’ sperm lifespan lasts longer when compared to other rodents. And their mating system has been reported to encourage sperm competition. Recent discoveries have also shown that the female has a choice in mating, and that female capybaras reject dominant male capybaras’ sexual advances 1.8% of the time and reject the subordinate males 41.7% of the time. Females not wanting to mate may dive deep enough to dislodge males.

Do Capybaras Mate For Life?

One exciting feature about Capybaras is their promiscuity (Polygynandrous) and polygyny. While the former relates to the females, who are able to mate with just any male in the group; dominant or subordinates. The latter pertains to the males who can take up as many wives in the group. Though male-dominant secures more mating than each subordinate in their group, subordinates males record more mating than each dominant male.

From the above explanation, we can easily deduce that Capybaras practice harem-based breeding, which involves a dominant male and several other females and other subordinates present in the group.

For How Long Is A Capybara Pregnant?

The gestation period in female capybaras is between a minimum of 130 days and a maximum of 150 days. Birth is carried out privately on land and away from the group. The female rejoins the group within a few hours of conceiving their young ones. Raising and nurturing of pups are carried out by every female of the group, hence reaffirming the term “Alloparenting”. And their protection from possible dangers is ensured by the group at large.

As with all mammals, save for the small subclass monotremes, Capybaras are live-bearing animals (i.e. Viviparous; they give birth to their young ones’ live). The development of the embryo takes place within the body of the female Capybara. And this lasts for a total of one-hundred-and-fifty days, until eventual birth.

DON’T MISS: Can Capybaras Be Kept As Pets? (Domesticating Capybaras)

And the young ones/pups are weaned for about three to four months.
Hence, it can be deduced from the above paragraph that capybaras are not egg-laying animals, but mammals with distinctive mammalian features and attributes.

How Many Babies Can A Capybara Have?

Capybaras are capable of giving birth to 2-8 pups at a time and have an overall average of four pups at a birthing. Their pups are precocial at birth, weigh up to three to five pounds at the instance of birth, and are able to walk hours after birth (as seen in Goat’s kids).

At birth, the presence of cheek teeth and apparent wear of those teeth are noticeable in their pups. The young pups are then returned to the group after a few hours of nascency and may be suckled by all females in the group for a duration of three to four months and up to fifteen pups may be raised and nurtured by a group at once.

The pups are able to graze on grasses and other aquatic plants a week after birth but continue to suckle nonetheless. And are able to dive and swim, but keep to their parent’s side to avoid predators like caimans. They stayed with their parent’s group until they are about twelve months old. And within this timeframe, they are nursed, catered for, and protected from dangers by their natal group.

Groups smaller than four adults are unable to rear any young ones. Young capybaras often ride on the female’s back to further stress the mammalian care given by Female Capybaras. And they also spend much time caring for their young of different ages.

Capybaras are able to live for up to 8 -10 years. But may live lesser than that in the wild due to predation from wild cats, ocelots, and other predatory animals. Their average life expectancy in the wild is about six years.

When in managed care, like zoos, they have a higher survival rate and are able to live up to fifteen years at max. Their average lifespan under managed care is ten years.

According to the IUCN assessment in 2016, Capybaras were listed to be of the least concern for extinction in the near future, due to their fairly stable population throughout Central and South America natural range. However, their population may have declined in numbers in certain areas due to their indiscriminate hunting by men, loss of natural habitat by deforestation, and increased water pollution level.

Other men’s activities like bush burning and encroachment may play a major role in the decline in their numbers in recent times.

How Do Capybaras Relate With Other Animals & Humans?

How To Live With A Capybara In My...

How To Travel With A Capybara [All You...

Where Is It Legal To Own A Capybara...