What Do Capybaras Need To Survive?

Here again, I will be touching on a different area that concerns the animal, capybara. This area depicts an answer to the question, “What Do Capybaras Need To
Survive? ” Just like humans need oxygen, water, and food to survive — the capybara’s survival is dependent on a few things.

RECOMMENDED: How To Groom A Capybara As A Pet

The aim of this article is to uncover what capybaras need to survive, and this information we are about to share is one that people, who desire to adopt a Capybara, must adhere to.

I don’t need to mention that Capybaras are the largest rodents in the world — because I stated it severally in my previous article & I also made it clear that it will be very difficult for capybaras to survive where there is no pool of water for their daily activities.

Capybaras Need Lots Of Water, They Are Excellent Swimmers, Watch How These Rodents Swim Effortlessly In This Video

The Capybaras are closely related to guinea pigs and cavies. As a recap of where Capybaras can be found, they inhabit the southern part of America.

Before we go into answering the question, “What Do Capybaras Need To Survive?” — let’s look at the habits of a Capybara.

RECOMMENDED: Can Capybaras Be Kept As Pets? (Domesticating Capybaras)

It’s generally known how social Capybaras are — that’s why they are tagged, social creatures. A capybara’s group contains about 10 members. In the period of the wet season, it’s different; a group can consist of around 40 members.

During the dry season, it’s over x2 of 40 members — up to 100 members. These groups are led by one dominant male.

According to the San Diego Zoo, the home range of a group is likely to be from 5 to 494 acres (2 to 200 hectares). In case you don’t know, capybaras are crepuscular animals, and because of that, they’re more agile and active during the dawn or dusk.

Capybaras, sometimes, become nocturnal when they feel threatened —by becoming nocturnal, we mean that they will stay active/awake at night and sleep during the day.

They use the dark to their advantage; they hide in the dark to go about their usual activities so they can, by far, reduce the possibilities of being attacked by a predator.

Capybaras are recorded as herbivore animals — meaning, they eat vegetations. On their menu are grasses and water plants — though squash, grains, and melons, sometimes, also make it to the menu. According to San Diego Zoo, up to eighty percent of their diet is comprised of just five different species of grass.

A typical eating day of a capybara can include 6-8 lbs. According to the Rainforest Alliance, they consume 2.7 – 3.6kg of fresh grass.

A female capybara’s gestation can be in process for up to 120 days. She typically gets delivered of, at once, about three pups — though it’s a normal occurrence for a female capybara to give birth to up to seven offspring at once. The pups of a capybara weigh 2 – 3 lbs.

DON’T MISS: Grooming A Capybara Well – Five Must Have Things

When these pups are a year old, they leave the groups of their parents and go out in search of theirs. As compared to the male Capybara, it doesn’t take long for a female capybara to mature.

The time interval it takes for the male and female capybaras to mature.

According to the Animal Diversity Web, they live between six to 12 years.

Capybara — a water-loving rodent —need their dry skin to always stay moist, that’s why they love being around environments with abundant water.

According to the International Union For
Conservation Of Nature (IUCN), a few of their moist habitat include river banks, marshes, estuaries, and along streams in South and Central America. I haven’t mentioned this about capybaras: capybaras are also known as water hogs. Capybaras do take a nap around shallow or muddy water.

What Capybaras Need To Live?

Looking from the preceding paragraphs, you can get a clue of what capybaras need to survive. They entail thus:

How Does A Capybara Survive?

This rodent, Capybara, sometimes does mind being alone, even though they are used to moving in groups — groups can be up to 40.

Throughout the year, their breeding season varies. In a few areas, people go out hunting for Capybaras with the intention of using their skin — so the capybaras, knowing this, feel threatened.

How Do Capybaras Protect Themselves? 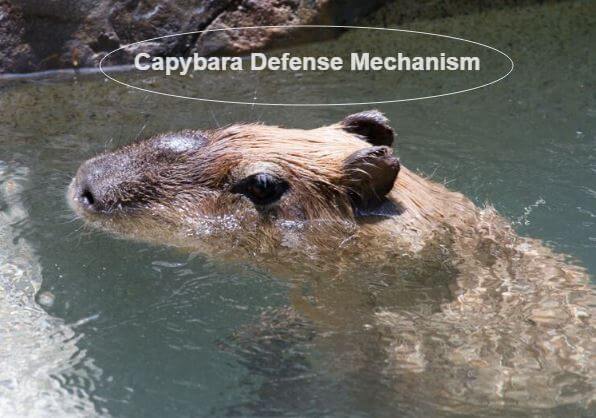 If they hear or perceived danger/predators coming, they will dive into nearby water and hide. The jaguars and the anacondas are their natural enemies — and its worst enemies include caiman, puma, and MAN.

The population of the Capybaras has been greatly affected in the past as a result of hunters’ interest in them.

According to the IUCN Red List, the Capybaras are not in any way going extinct. People produce leather from the skin of Capybaras and Capybaras are also eaten by people.

In some countries, the numbers of Capybaras stabilized when restrictions were placed on hunters — preventing them from killing this creature.

The major reason why the population of Capybaras dwindles is that they get hunted by humans for the purpose of being used for food or for leather (their skin).

MUST-READ: Can Bring A Capybara Home To Be Kept As Pet?

Capybaras are very small animals, even though they are known as the world’s largest rodents.

They can experience the growth of up to 25 inches tall. Generally, they’re 4 feet tall and can weigh up to 150 pounds. I believe you know that an animal that’s generally proportioned requires a large amount of space so it could easily wander around.

These animals need to vent their energy and they need space to do this — space to walk and run around. Keeping them indoors has a way of making them depressed. When depressed, they can easily develop behavior issues and aggression.

Just as dogs and cats tolerate tumble and rough games, capybaras are less tolerant of such. So, families that have kids below the age of 12 should think of adopting a capybara, as irritation can get them aggressive.

When it comes to a rodent that’s cute, capybara takes the spot. They have a large nose, cuddly face, expressive eyes, and long teeth.

Capybaras can exist for up to 12 years. You won’t believe you can use the size of a medium-sized dog to compare to the size of a capybara.

They are quite affectionate; they, to a large extent, get attached to their owners. The answer to the question, “How Long Do Capybaras Live As Pets?” — is simply 12 years. If you adopt them from their infant stage, you’d have their company for 12 years.

In summary, as an answer to “What Do Capybaras Need To Survive?” — I said that Capybaras feed on grasses and water plants.

I further stated that Capybaras love moving in groups — groups of 40 and up to 100, depending on the season.

In the wet season, they can move in up to 40 groups while the dry season gets them moving in up to 100 groups.

As an act of survival, they dive into nearby water when they spot a predator. Coward moves, right? Well, they can’t stand most predators — such as the anaconda, pumas, etc.

According to research, a capybara can hold its breath underwater for up to 5 minutes and when it decides to take in air, it doesn’t get conspicuous to the predator that they’re at the surface of the river.

Capybaras need the company of either their kind or their owners to live without getting depressed and developing aggression.

The interest of people in this animal has heightened that a lot of persons are now looking at keeping a capybara at home as a pet. And again, their popularity, too.

The natural home of this creature is the region of South America. Places like Texas and Pennsylvania also allow people to adopt capybaras as pets.

Lastly, capybaras love making their skin moist, as that’s the only way they can prevent their skin from sunburn, and that helps them moderate their body temperature.

READ NOW: Reasons Capybaras Like To Live Near Rivers

They’d get themselves soaked in muddy water for the purpose of protecting themselves. If you adopt a Capybara, ensure that you create a pond-like spot in your house, where they could easily feel at home.

How To House Train A Capybara (8 Mandatory Requirements)

How Do Capybaras Get Their Food? – {Answered]

How To Live With A Capybara In My...

How To Travel With A Capybara [All You...

What Are Poisonous Plants Dangerous For Capybaras? [Answered]

Do Humans Hunt Capybara (What Does Capybara Meat...